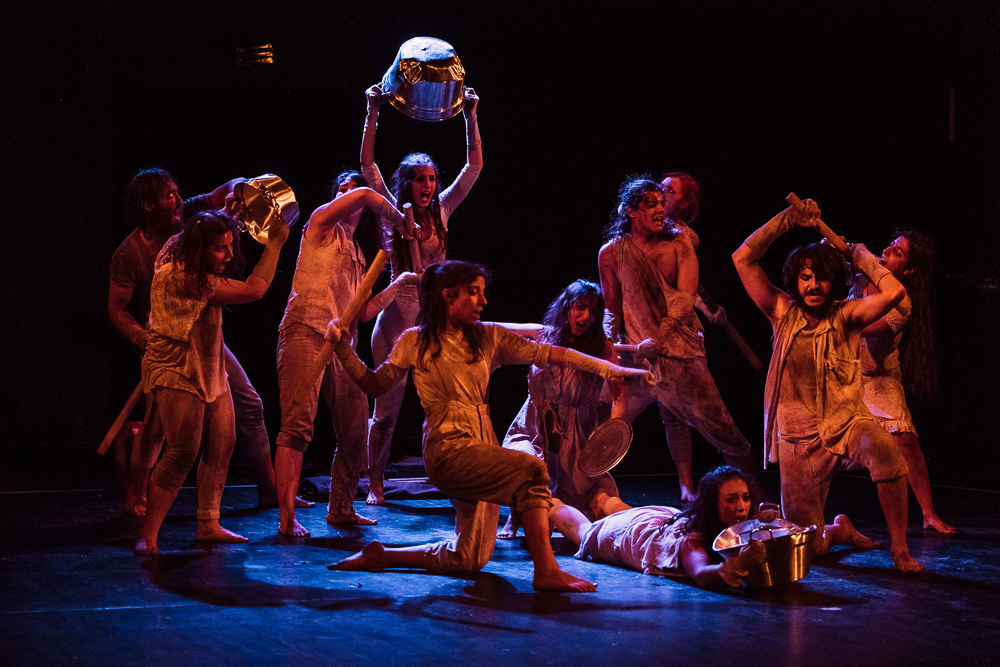 While the audience is entering the Collegium Nobilium Theatre, actors from Italy are already performing on stage previously deprived of its wings and reduced to just bare walls. Wearing dirty, stretched, patched-up clothes that used to be white actors are humming a tune that resembles the song of the Southern slaves. There is also a movement: everybody is performing a simple choreography representing working in a mine – hacking down rocks with pick-axes, pushing carts with coal and drilling. One can sense great toil and considerable tension. After a moment, according to the changeable music theme (the song performed live abruptly gives way to an electronic and psychedelic tune) the miners stop working and put on animal-like masks and gloves. They form a group static choreography. The metaphor is simple and leaves no place for any deliberations.
The form of the spectacle will stay the same until the end. ‘Farma’ is a spectacle consequently based on group choreographies of different degrees of complexity and expression power, completed with songs and dramatic interludes. Expressive acting is sometimes bordering poster-like aesthetics, but, on the other hand, the idea is not to introduce modulating or soften the story inspired mainly by George Orwell’s ‘Animal Farm’.
The book has been divided into 4 parts setting the structure of the spectacle: Slavery, Revolution, Freedom and, finally, Democracy. Altogether, they tell an allegorical tale of an enslaved community gradually gaining self-awareness as a result of suffering and exploitation to eventually topple the tyranny of Mister-Farmer, a personification of Old McDonald from an old child song.
Obviously, the coup is successful, but what are the characters to do next? How should they use the coveted freedom they fought for? What does it mean to be free anyway? The answers provided by the Italians are deceitful. Freedom is the liberty to be hungry, to work or to live in fear and have an enemy. Very quickly do the rebellious animals realize that to be free that is no way to avoid working and it involves a lot more responsibility or uncertainty than comfort.
The naïve community falls under the influence of slick demagogues able to turn democratic procedures against the idea of democracy. Eventually, it decides to hand over the power to yet another sovereign – Cleopatra the pig. After all, we are facing quite a bitter reflection – freedom is mainly the liberty to become a slave of someone else.
At this point, one should also point out yet another level of the spectacle. Apart from the tale of the querns of revolution slowly but surely grinding the ideas of equality and self-government, ‘The Farm’ is also taking a stand in a discussion about the cruel treatment of animals in the food production industry. This stand becomes the most visible (despite some shortcomings in the Italians’ acting skills) when the almost naïve images are combined with naturalistic and brutal descriptions of procedures like stunning and killing a pig with a bolt gun. As Aristotle once said ‘A human being is an intelligent animal’. Through the mouth of Major, an old pig, Orwell adds ‘No animal is allowed to kill another one’.

Based on „Animal farm” by George Orwell