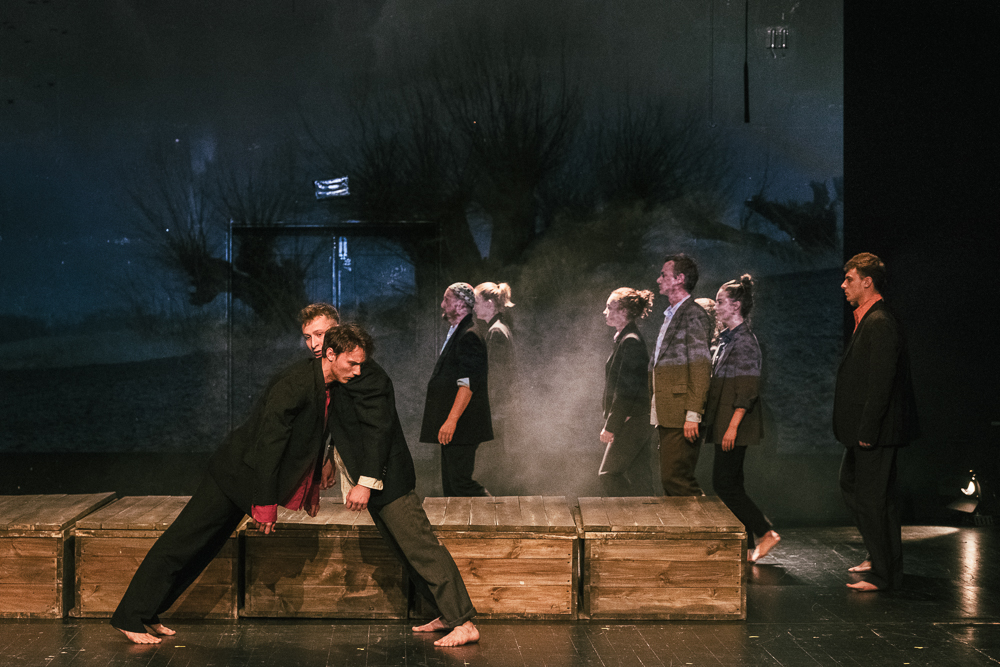 Old Polish chants, graves and a dark, gloomy background. Setting the spectacle in a village cemetery is the first sign that the team was mainly inspired by the Grotowski’s interpretation of Hamlet. The performers took acting exercises related to the physical method know as ‘The Theatre of 13 Rows’ and brought them to the stage. Actors resemble a live machine, rhythmically moving around the stage. On the other hand, this solution has also rendered acting somehow robotic. Students from National Academy of Dramatic Arts along with actors from Chorea Theatre obviously do not engage emotionally in scenes they are bringing to life before our eyes. They barely propose a sketch of them inspired by the popular text by Wyspiański. They try to face the history of Hamlet, even though they know that this attempt is bound to fail.
At the end of the spectacle, one of the actors stops everything and claims he is unable to act this way. Then he hands pieces of paper to his companions and so, from now on, they roam from one prop to another, asking themselves questions like ‘Who is Hamlet?’, ‘What is Hamlet thinking about?’ or ‘What does the Elsynor castle look like?’.
Actors themselves decide that both the Shakespeare drama and the character of Hamlet manifolded by various artists is something elusive, overly profound and impossible to define in an un-ambiguous way. They are certain of only one conclusion – each of them has to find a Hamlet inside oneself. Hence there are no separate roles in this spectacle. Actors are juggling characters from the drama between themselves and adding their own words to the lines. They are focused on their own craft and their work.
When the acting stops, directors themselves come on stage. They enact a half-comical scene in which Tomasz Rodowicz explains what was his initial idea while working on the spectacle. Meanwhile, Waldemar Raźniak tries to pull him off the stage, embarrassed by his colleague’s intrusion. The final scene is met with general laughter and sets the atmosphere for the future ceremony of handing the awards.
This is indeed the last spectacle of the festival. Among the viewers one can see jurors, invited guests and representatives of all the participating countries. The ceremony was held in a surprisingly friendly and relaxed atmosphere. Even harsh criticism included in the speech by the president of the journalistic jury did not overshadow the generally positive tone of the meeting. Representatives of certain theatre schools bid farewell to the National Dramatic Arts Academy with smiles on their faces. The next anniversary edition of the iTSelf festival which will take place in 2019 and we already can’t wait!