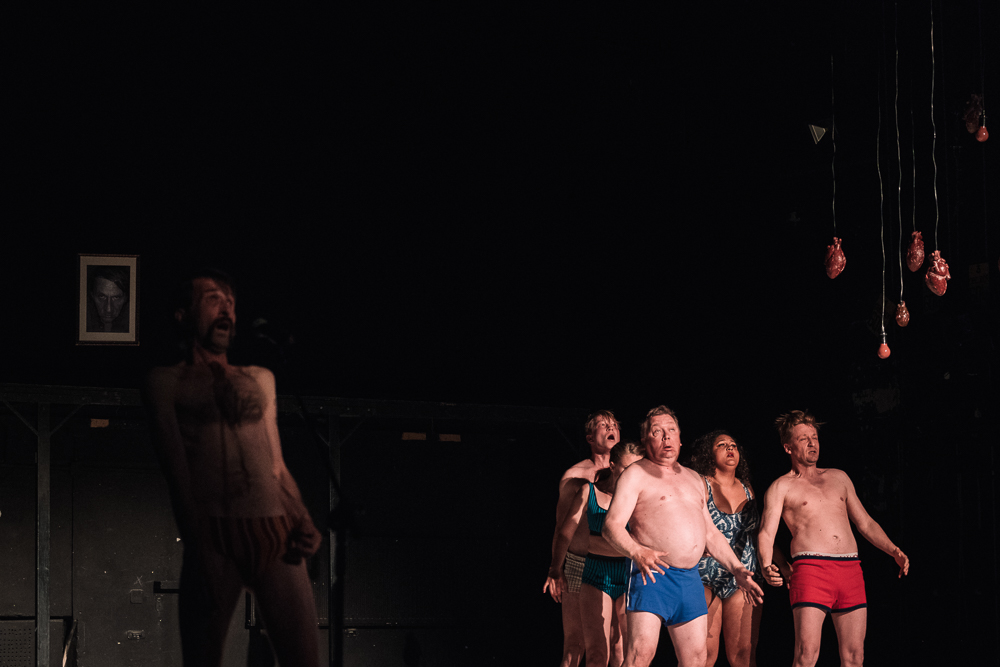 Michel Houllebecq has taken his place in the intellectual landscape of Europe for good. The position he occupies now put the former label of ‘enfant terrible’ in the past. The Frenchman has been nominated as the pope of artists, even though his political views were leaning to the right. A nihilist and a prophet, a poor writer to some, has been elevated to the position of the icon of modern times. Finnish artists put Houllebecq’s portrait in the back of their scenography for a reason, a kind of an ironic play with the cult surrounding the author.
The elaborate scenography requires further description. The space is filled with stuffed dogs. It’s a reference to ‘The Possibility of an Island’ and a metaphor of a dog as a ‘machine to love’, reflecting the emptiness and insecurity of a Western man. At the back of the stage stand objects resembling tents. At the top, heart-shaped lamps gleaming with vivid red were installed – however, their shape does not refer to the cartoonish hearts, but the actual, anatomical ones.
In fact, the animalistic instincts and the ‘meatness’ of existence become the leitmotiv of the spectacle. One can hear the comparison of the audience with a ‘dangerous animal’ and the artist with its prey practically at the very beginning. In spite of appearances, the acting is not based on rehearsed over-erotization, but rather on the shameful aspect of corporealness. This sensitivity is far from sensible – performers stumble around the stage and they grab their own limbs like toddlers while making stupid face. The actress playing Raphael Tisserand that we know from ‘The Expansion of the Battlefield’ brings to life a crooked character with his head almost welded to his shoulders.
The monologues, the interactions and, above all, the corporal aspect of acting are a constant struggle between the serio and the buffo. The final result presents the embarrassment of human intercourse in an ironic way. At some point, Herbert Marcuse himself was referenced, as he described the process of transformation between ‘the private’ and ‘the political’. The changes occurring in the field of sexuality make way for much wider transformations. The main focus of the artists is the body in love with consumption, undergoing visual reproduction and thus generating new needs. Characters burn in the excess of sensations and the spiritual aspect of existence is pushed into the background. They fill their time with conversations about sex tourism, flexible bodies of Thai women and erections. However, the will to do something more pierces through the layer of trivial talk. The Finns perform songs by The Cure named ‘Love Song’ and ‘Pictures of You’ thus expressing their longing for the genuine feeling and, at the same time, emphasizing the power of superficial presentation and appearances (‘I’ve been looking so long at these pictures of you/That I almost believe that they’re real’). The stage is taken over by the weightlessness of a hedonistic way of life, but a dream of becoming an emotional whole is timidly trying to pierce through it.
The variety of Finnish artists is a positive surprise – not only on the ethnic, but also at the physical and register level. The small acting group managed to create an intriguing range of individualities efficiently operating with both irony and seriousness. The wide range of emotions concludes with silence, as the spectacle’s final represents a counter to the its previous message. Actors sit in concentration at the edge of the stage. Microphones amplify every sound, no matter how silent it is. The sound of coursing water or funnelling seeds form a single bar which, in turn, becomes a part of a soundtrack setting the spectacle in motion. The bodies of actors begin to rebel against themselves – the characters experience difficulties trying to control compulsive hand movements. The pieces eventually form a unified group stimulated by rhythm. Narcissism is replaced by the sense of community. The portrait of Houllebecq falls to the ground with a bang.

The Theatre Academy of the University of The Arts in Helsinki