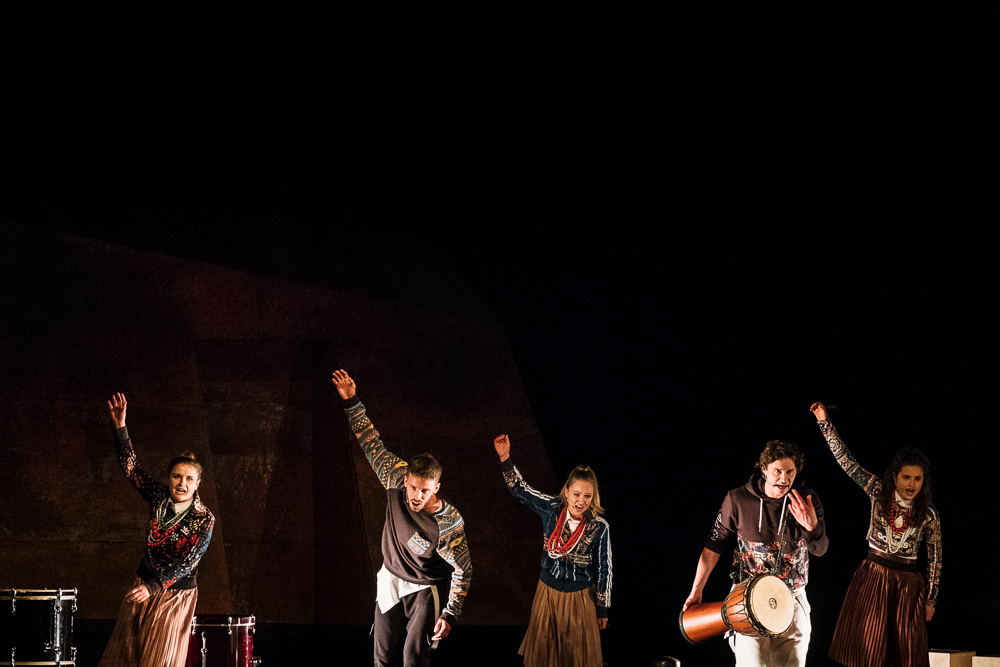 Diploma spectacles are usually short-lived, so very rarely are they surrounded with an aura of unusualness reaching beyond the walls of schools that brought them to life, but this is exactly what happened in this case. It all started with three ‘Ludwiks’ – theatre awards from Krakow. Then, there was a performance at Przegląd Piosenki Auktorskiej (Stage Songs Review) in Wrocław, an individual award at the Czech festival SETKÁNÍ/ENCOUNTER and at last, but not at least, the Grand Prix of the 35th Festival of Theatre Schools in Lodz. Recently, the spectacle was even staged at the ‘Wybrzeże Sztuki’ (‘The Cultural Coast’) festival in Gdańsk as an equal to the most interesting plays shown by repertory theatres in the past season. Everywhere it went, it was met with a standing ovation and received enthusiastic reviews. This time ‘Do DNA’ by the State Theatre School in Cracow has come to ITSelF and the reaction was no different. The lights were not on yet and the viewers have already jumped to their feet to give the spectacle a long applause.
Two girls and two boys, or should we say, three maids and two peasants: Dominika Guzek, Agnieszka Kościelniak, Weronika Kowalska, Jan Marczewski and Łukasz Szczepanowski. They all deserve a mention, as it is thanks to them that the spectacle wins over the audience in such an extraordinary way. But is ‘spectacle’ the right term in this case? Maybe we should label it as a ‘show’ or a ‘concert’? ‘Do DNA’ is all about the songs. One can hear almost no dialogues exchanged on stage. Compositions smoothly go from one to another, yet they do not constitute any kind of a whole.
Their main theme is the subject that humanity has been talking about for ages: love or the lack of it. The names of a couple dominating folk culture, Kaśka and Jaśko, echo throughout the whole performance. The spirit of Polish greatest authors is in the air. Mickiewicz, Słowacki and Wyspiański always eagerly included elements related to Polish folk culture in their works. In this case, we dig even deeper, closer to the bottom of Polish culture and its roots, as the lyrics come from the collection of father Władysław Skierkowski and Oskar Kolberg, a restless collector of Polish tunes from the 19th century. All these elements make us feel strangely uninhibited. Everything seems familiar, everything somehow belongs to us. Even those who dislike folklore have to admit that Ewa Kaim (the director and the screenwriter) and Włodzimierz Szturc (the drama) have succeeded to find a common ground.
Even with the oversaturation of folklore, one does not get the impression of visiting a museum. Au contraire, actors in Maćko Prusak’s choreographies usually look more like they came to a modern nightclub rather than a barn dance. The costumes by Mirek Kaczmarek are an interesting mix of tradition (floral themes, beads, white shirts) and modern times (shiny fabric, visible logos of popular clothing brands) and so is the music. Dawid Sulej Rudnicki, who is present on stage, does not re-enact anything. Even though he is playing a folklore bass and a piano himself, he doesn’t refrain from seventh chords adding an almost jazz-like vibe to some of the songs. Apart from singing in various styles, actors use their musical skills while playing various instruments. One can hear violins, drums and even exotic cajóns.
No matter if someone is performing solo, in a duet, a quartet or as a part of a choir. Everything plays together exactly like it should.
A couple dozens of songs, a few instruments and just five actors on stage sufficed to pack an already overcrowded Syrena Theatre to the last place. This was the last performance of the iTSelF festival competition.