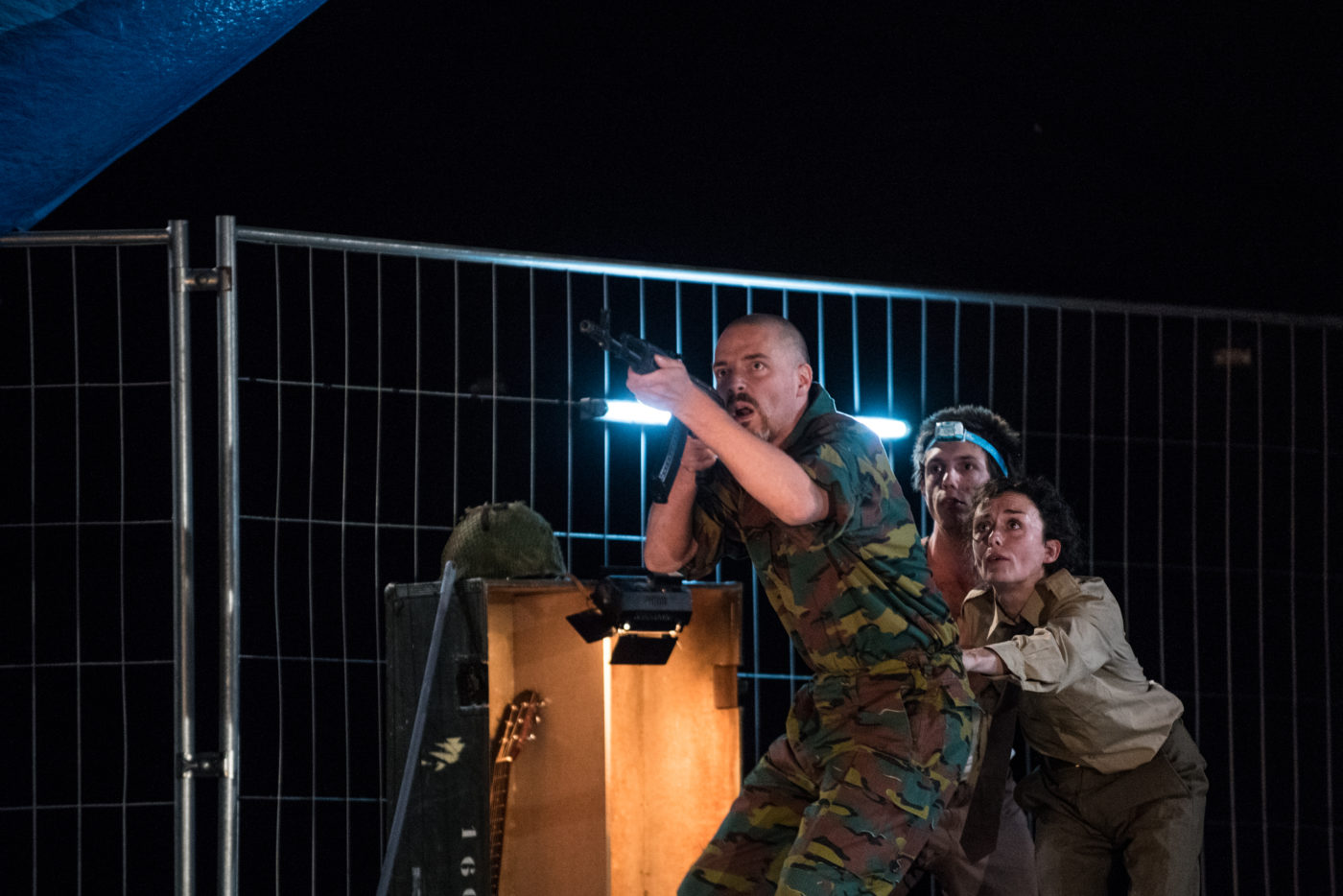 Just four actors on a huge stage. Silence, apathy, waiting. The Belgian spectacle is a true test for of audience’s patience.
Over the course of 90 minutes, just a few sentences are uttered, left untranslated due to the improvised character of the spectacle. Hence the only way for us to understand what is going on stage is through observation. It is as if we were watching animals in a cage. We witness a meagre encampment. A military base actually, as indicated by clothes the actors are wearing. They have been here for a long time. So long, that in fact nobody wants to pretend everything’s normal anymore. So long, that nobody misses home, plays cards or starts a conversation anymore. Characters are just waiting – not killing the time, but watching the time slowly kill them.
Staging such a spectacle is an impressive act of courage. Not everyone will appreciate the originality and a lot of viewers will never get along with a story with no plot whatsoever. However, every time we deprive a work of art of certain elements, the rest becomes more articulate. Watching the relations between the members of this small group with radically different personalities is fascinating. Not everyone can sufficiently handle the situation. For example, we see a typical group leader – maybe he was elected formally, based on his rank, or he was chosen in a more natural way. He looks after his crew and the sense of responsibility makes him handle his madness in the most efficient way, but sometimes, he loses control of himself too. On the other hand, we see a mysterious man with a baklava who is clearly secluded from the rest, demonstrating symptoms of a psychological disorder. He tries everything to run away, but he has nowhere to run to.
Such vivid characters forced to create a micro-community with a hierarchy by their own isolation allow actors not to follow a pre-meditated script, but also to create interesting situations off the top of their heads. One has to admit that the weird atmosphere of realism accompanying this improvisation is unmistakeable for anything else.
The cooperation of the acting team is really impressive. They interact with each other on stage really well, not missing the sense of their own persona against other actors for a single beat. This clarity of content and concentration definitely required a lot of practice.
One could pose the question about the purpose of the four soldiers to which the spectacle does not provide too many answers. One of their activity is standing guard, but it quickly turns out that it’s actually not that important. Watchmen change in an accidental order to eventually just leave their post. Everything seems to be indicating that this activity merely gives them an illusion of purpose. Only those close to a breakdown engage in it. To them, it is some sort of pleasure which they are not even fighting for. They would do anything not go back to the awkward act of doing nothing, void of any thought or ideology.
However, there is always something that creates the purpose of the spectacle. The only repetitive element important to the characters and setting the rhythm of the play – the military drill. For a brief moment, something changes and the stage brightens up. Working together breathes new life into the team. Common apathy is replaced with the atmosphere of utmost concentration. This is when we hear the eponymous ‘HO!’ four times, repeated by each of the participants, as, against all odds, in this particular moment they form a team. And they have to practice to be ready! This situation is just temporary, right? The moment they have been all waiting for is bound to happen one day. That is why, they practice and they give it everything they got, but as the drill ends, the lights are dimmed again. Once again, soldiers leave their trance and resentfully walk to the empty corners of the base. They will remain there until the next call for drill. This is how they are preparing for an attack of an enemy, that doesn’t really exist.

The Royal Institue for Theatre, Cinema and Sound of the Erazmus University in Brussels BELGIUM