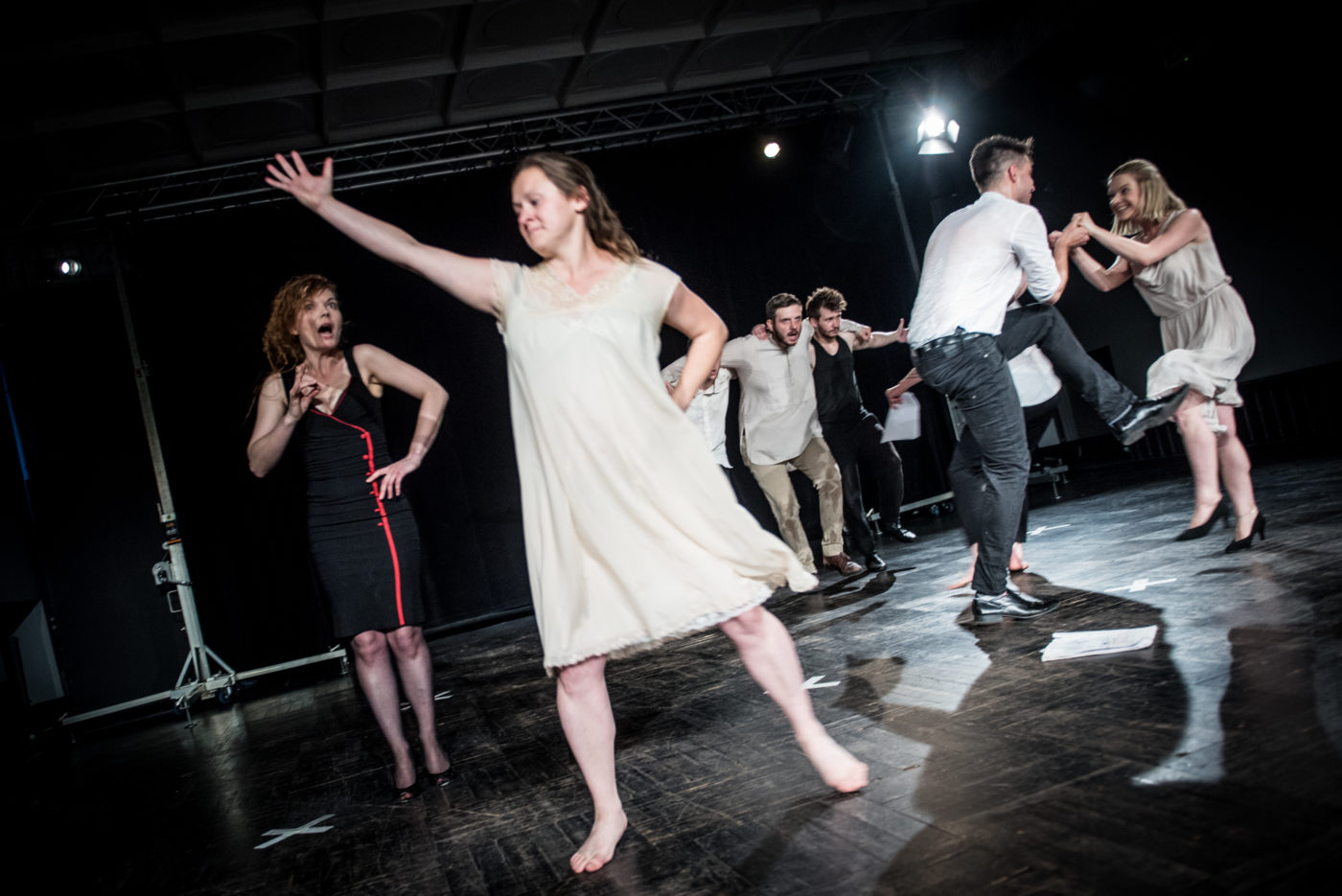 In theatre, self-consciousness can become a self-fueling mechanism. However, sometimes the message gets lost somewhere between complicated mind games and inbox references. Director Agnieszka Baranowska managed to avoid this trap. Futhermore, ‘Dzieło’ is an example of a simple, yet incredibly brilliant and accurate spectacle.
Actors wearing casual clothes stand in two rows. This human machine (this choice of words is no coincidence) is set in motion by despotic director – the Demiurge. The plot unravels with the omnipotent Voice played by the actor standing at the side of the stage. His commentary, spoken in language resembling the Book of Genesis, sounds neither religious nor mockingly and it refers to the complexity of a creative process. The Voice refers to perceiving art as an arduous process which requires a lot of tears and sweat and the quasi-romantic paradigm of an artist as an elevated human being in possession of ‘power over souls’. The references to Grotowski and the ‘whole act’ he postulated in the prologue are no accident. This ironic litany features guidelines describing the desired shape of a directorial opus magnum. A work of art has to stand against history, invalidating it while simultaneously drawing from its heritage. An artist is obliged to perform constant transgression and engage in a dialogue with tradition at the same time. Hints are reduced to absurdity one after another. ‘A work of art needs to appear larger than it already is’ says one of the actors and what follows is listing a series of quotations from texts by theoreticians and terms which might as well had been taken from the Pavis’s Dictionary of the Theatre.
The Demiurge gives actors a series of commands: ‘run’, ‘listen’, ‘cry’ and so on. Performers respond to a certain emotion or a state and then they invent short stories. They include stories of a unremarkable everyman, a peasant woman or a soldier. Actors utter lines without a single pause for a breath, with limited voice modulation and in a downright mechanical way.
The original assumption of the director gradually reveals itself. A subordinate collective body grows individualized. Although the actors still say their lines in a similar manner, their acting becomes more authentic and emotional thanks to small gestures like a short pause or a shaking hand. Their confessions become more and more personal. The theatre matter is slipping out of the Demiurge’s hands, the machine starts to live a life of its own. At this point, one has to commend the creators on their very precise acting. ‘Dzieło’ does not feature any great emotional extremum and the instances of interpretational hesitation are very subtle, yet convincing.
‘A work of art’ is an image of a creative process multiplied by two. The viewers witness melting of an acting pose and the exposure of sensitivity which in turn is a theatrical way of working through the process of preparing a spectacle. In theatre, fiction has a very specific basis – the individual experiences and sensitivity. A spectacle never becomes an abstract entity, a generic rendition of assumptions, a pointless pursuit after an idea. It may sound pompous, but theatre grows out of the truth, not only that of the actor, but first and foremost the one of a human being. For that reason, it is the human being with its own story and an individual experience should be the creative force of a spectacle.
Baranowska’s play strikes the viewers as simple, but profound. It is also very derisory, biting the fabric of theatre in an uncompromising way, pointing out unrealistic artistic aspirations, but at the same time funny and focused on acting in a specifically sensitive way.