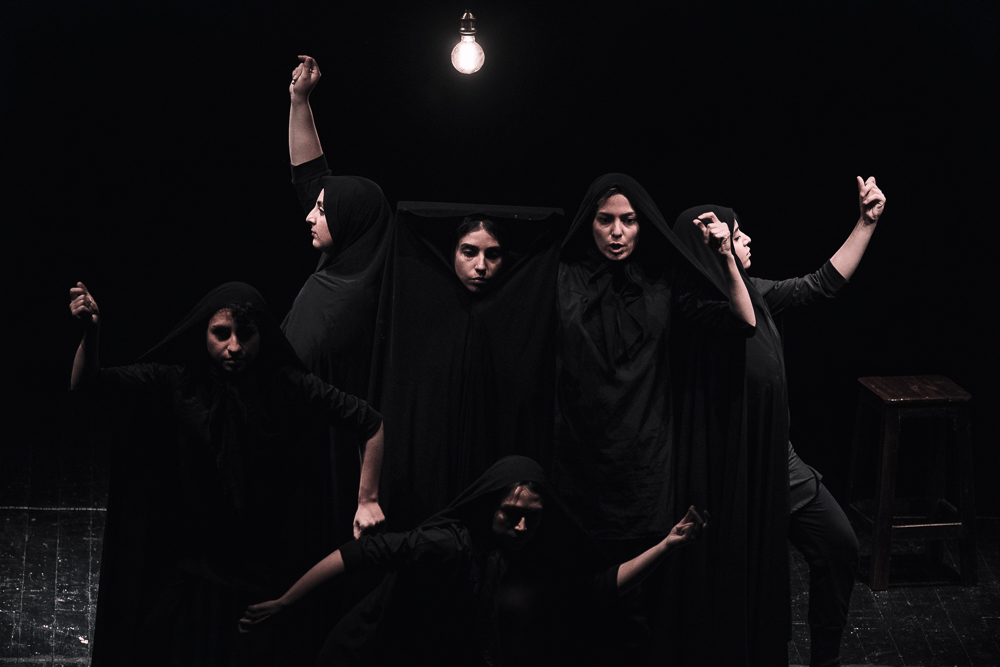 The representatives of the Soore University from Tehran are visiting the iTSelF festival for the third time. Two years ago, the audience had the opportunity to witness the spectacle named ‘Śniąć śmierć w śniegu’ (‘Dreaming about death in the snow’) directed by Jaber Ramezani – an image of existential decay atrophy employing silence on stage in a very considered way. ‘Rytuał’ has a very similar ambience, even though an oversimplified comparison would be hurtful to both plays. The common ground between them is the attempt to reach the core of each performative action, the sensitivity of the performer. The main, and, one could say, the only motive force of the spectacle are the actors. Every other device has been limited to the minimum. The play is set on an empty stage. The only pieces of scenography are a stool and a lightbulb. Every female actor is wearing a dull, dark costume and a chador.
The framework of the spectacle is a Persian fairy tale about a woman discovering a palace in the middle of a desert and enters it to discover a corpse of a dead mean and 7 tomes of legends. The structure of the content instantly reminds us of ‘The Arabian Nights’. Viewers expecting the Orient in a nutshell and colourful folkloristic tales adapted to the theatre stage might leave the spectacle disappointed. The play consists of shreds of tales, residual scenes, almost frames of sort. Excerpts from fairy tales interweave with raw, contemporary language. The message of the spectacle is conveyed through singing, playing, using minimalistic movement sequences, bits of dialogues and sinister whispers. What is the most powerful aspect of the spectacle? Its epicentre is the women experience.
Together, the actresses form a body. The rich lady character is played by 5 of them at the same time, each of them consecutively uttering the lines. There is a contrast between this character and the servant who finally rebels against the oppression in the last scene. It is noteworthy that each time the servant is played by a different actress. Usually, every character is meant to be personified by a few people. The scene of a birth is a perfect example. Each actress expresses a different emotion or a state – one of them is a static body giving birth, another one stands for a cry or a painfully clenched fist or a grimace that usually accompanies the process of pushing out the baby. This simple solution helps both to universalize and individualize each experience shared by the actresses. The sense of a community and the unitary aspect of each of them constantly interweave with each other.
The spectacle represents a strong, yet intimate voice. One could trace an echo of a certain naivete expressed with detailed pictorialness. The heavy ambience of a tale about a woman willing to become a siren for a price of losing her voice (an inversion of a fairy tale pattern popular in the western culture. ‘The little mermaid’ is in fact a known example of a female rite of passage) was softened by literal devices like tying legs together with a duct tape or pushing a finger down somebody’s throat which symbolizes losing the ability to speak.
Darkness and light, lightness and heaviness – conflicted elements are joined together in a poetic, yet silent whole. Folklore-based tales carry a burden of an inevitable death. The reality and the fairy tale are only the distance of a whisper apart.

The Soore University in Tehran