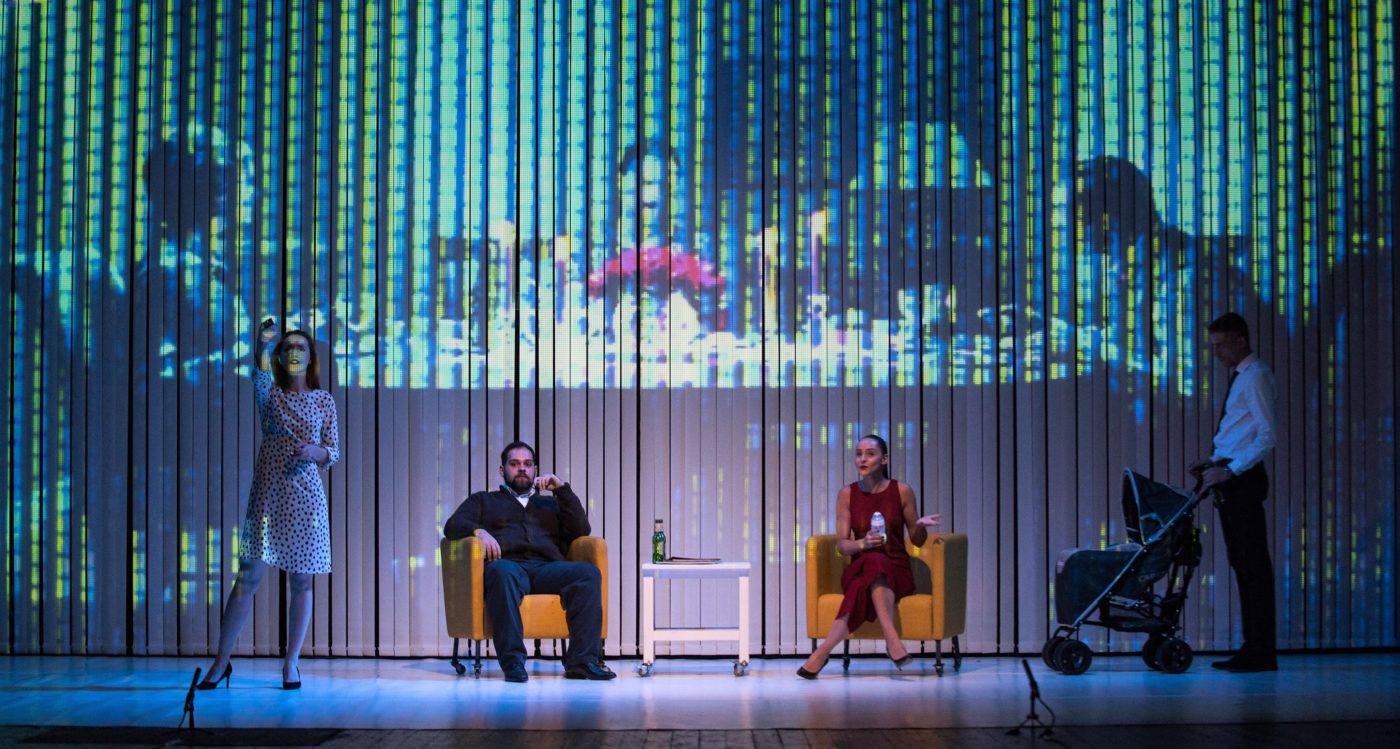 The starting point of the process of creating the spectacle ‘Rodziny’ directen by Eugen Jebeleanu could be the question about the definition of the title. How many things does it actually mean? How would it be interpreted by a child from a shattered family? Why does the law forbid a homosexual couple to start a family by adopting a child? What about children whose parents found new partners after their divorce? Who are they to each other?

The less obvious relations are presented by the scenes from everyday life. The heroes try to cope with the death of their loved ones, tackle alcoholism, face the chicanery from the people around them. On one hand, nameless characters are universal, easy to identify with, but on the other they are also very characteristic. Even though the consecutive episodes are fairly short, the relations between the characters unfold in interesting way, especially the dialogues between siblings whose mother is dead and their father fell ill. In one of the scenes a woman talks about her addiction, the feeling of disgust she experiences after looking in the mirror and her will to turn a new leaf. During her monologue, she makes pauses to ask her father trivial questions like ‘how do you put sugar in your tea?’. Those seemingly uninteresting elements intertwine with essential problems. The scene with a homosexual fighting for the right to adopt a child and struggling with the limitation of the system is as memorable as the one featuring a man talking about the new diet he is on.

This skillful balance between moments from everyday life and strong emotions or shock maintains the impression of authenticity. In case of the sequences, the accents were put in a way that both of them are important to the dramatical structure of the spectacle. The play does not consist of only tragedies, but if they occur, the acting is not overly expressive. This kind of composition does not fail to mention mundane problems.

Static positions are very symptomatic for acting and the spectacle itself (apart from the closing, energetic and musical scene) and so is the very cool way to act the consecutive episodes. Some of the dialogues are directed towards the audience rather than the partner on stage, which only strengthens the sense of aloofness, but also prevents the spectacle from turning caricatural. The minimalism is also reflected in the scenography formed by simple, white roller-blinds surrounding the stage unfolded at the start of each of the 3 parts of the spectacle. This solution is not very meaningful – the stories of several families intertwine with each other during the whole spectacle and the play’s parts do not stand out in terms of their content. The tripartite division seems to be merely a formal device, probably implemented to organize the structure of the play (which is already well-organized anyway). The ending of one of the parts really defends itself – it’s a melancholic rendition of ‘Mad World’ by Gary Jules. However, the very beginning of the Romanian play strikes the viewer as pretty puzzling, as it includes the description of the volcano eruption in Pompei – it’s difficult to find what does it have in common with the scenes to follow.