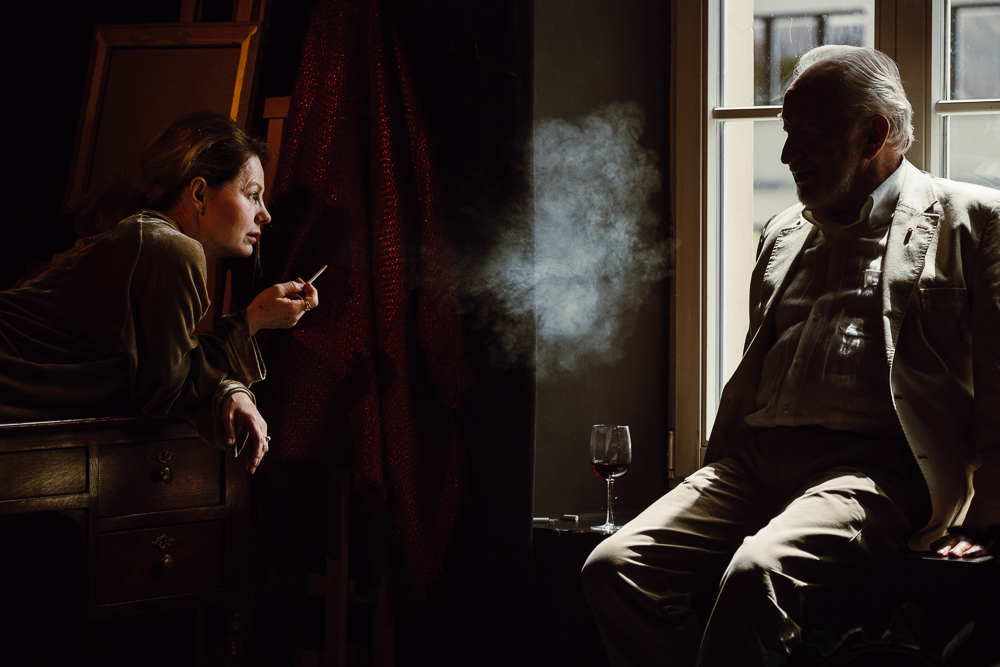 In her spectacle ‘Tatarak/Marta’, Karolina Szczypek managed to briefly bring to life ‘the room not made for confessions’ which Jarosław Iwaszkiewicz mentions in the introduction to his short story. However, in this room the author listened to the story of Mrs Marta, his friend, and then wrote it down. We find ourselves in a climatic, sweaty saloon filled with plants, images and easels. The atmosphere encourages confessions. The time slowed down, the dialogue is very relaxed. The scent of incense mixed with cigarette smoke hangs in the air. She (Ewa Skibińska) already knows that her condition is terminal and he (Krzysztof Kumar) reminisces about his friend who had drowned. The perspective of death is very near.
Sweet rush, a beach, a lake – out of the memories of the woman emerges an image from the past which this all those elements together. She gives an account of her first meeting with Boguś (Mateusz Burdach), a 25-year-old man working in the water management board. At some point, Marta ceases to answer him and becomes a hero of a retrospective happening before the viewers’ eyes. What follows is a series of dynamic snapshots, a few flashbacks from past meetings, standing in contrast with the beginning of the spectacle. Iwaszkiewicz is sitting right next to the audience and watching the show. Who is he? Has he taken over the narrative and is he telling us somebody else’s memory augmented with literary fiction? Maybe we are watching it from the woman’s perspective and the man is just one of the viewers? Who is telling this story and what will become of the memory about those events? Is there anything of it left in the words that were written down?
‘Of course, I wrote it all down as a writer adding what I imagine – sometimes, by the law that has been sacred for ages, but is in fact unjustified, I even peaked inside acting people’ – wrote the author in the beginning of the story. A reflection on a script played by the characters (or actually actors) really is seems to be the most interesting part of the spectacle directed by Szczypek.
In the last scene of the spectacle, distancing himself, Iwaszkiewicz reads the last fragments of the text out loud as if he was the one in power over them. After all, he is the author, he labelled (whose?) emotions with words and played his part in preserving that memory. Marta is standing at his side in despair, disagreeing with his version of what happened, mostly with the emotions she is hearing about. She tries to apply corrections and shout over the man’s voice, but he consequently accounts one sentence after another. ‘Can’t you remember? I told you three times and you don’t remember?’ is the last line she utters with regret and resignation.
An interesting change of places occurred during the 35 minutes of the étude. At first, Marta is in power, as she keeps her distance to her memories and remains in control over her emotions along with the narrative. Then, she turns into one of the characters – a fragile, ridiculous being, sawn together from bits of memories and running wild because of her feelings. In the last scene, she is standing there completely defenseless, without any acting force whatsoever, deeply engaged emotionally. Iwaszkiewicz rises from the status of a character to the author to keep the story alive. But who does it belong to anyway?

based on the works of Jarosław Iwaszkiewicz