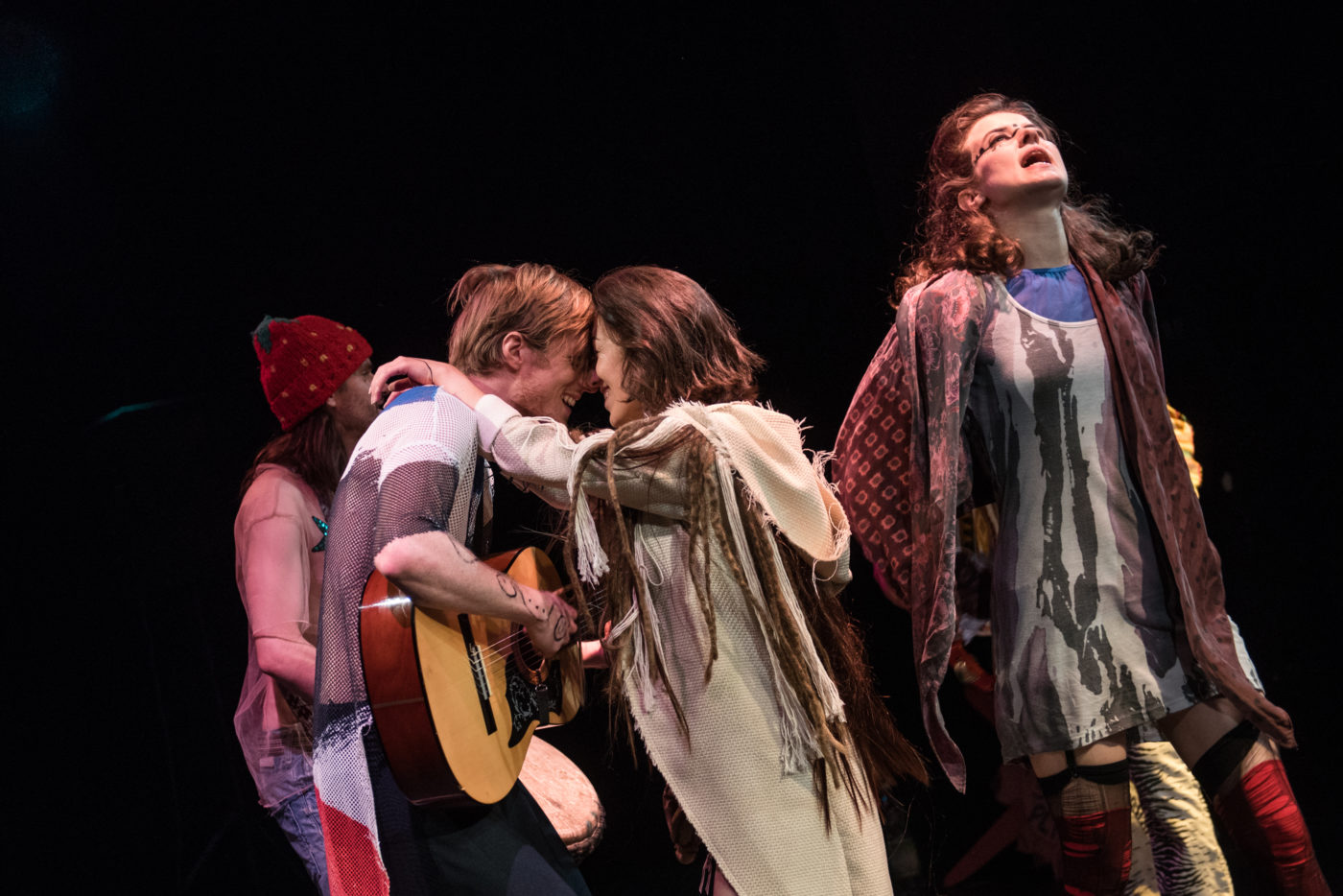 The beginning is joyful and energetic, accompanied by rhythmic sounds of drums, a guitar and a tambourine. Actors are playing their instruments, dancing, singing and shouting slogans like ‘Fuck for forest!’ or ‘Touch and be touched!’. Some of them leave their small acting space and invite the audience to take their places. Actors are smiling, shaking viewers’ hands, asking their names and thanking them for coming. They ask the young to sit on the floor and offer chairs to the older viewers. Their image resembles vivid beliefs about members of the counterculture movement from 1960s mixed with modern hipsters living in a squat. Soon, the monologue of one of the actresses reveals that she only wears clothes that other people threw away. In fact, she prefers to walk around naked, as she claims everything we put on ourselves and around us is artificial. It seems that the body might be the final citadel of naturalness.

But what is actually going on? We find ourselves in the middle of a vivid assembly organized by members of ‘Fuck for forest’ organization founded in order to raise money for ecological initiatives. How do they do that? They live in a commune and shoot pornographic videos among themselves and they sell them online. A simple, yet profitable solution.

It’s also authentic. The director Daria Kopiec was inspired by the documentary ‘Fuck for forest’ by Michał Marczak which tells the story of extravagant activities of ‘fucktivists’ which form the group. What drives them? In their own words – the will to preserve the dying natural environment and to return to the natural while rejecting social norms and concepts limiting our actions, feelings, and – first and foremost – bodies.

As you can see, the heroes of ‘Strangers in paradise’ are epigones of the ideas behind the hippie movement. They are exposed to every threat their predecessors were before, both on the ideological and personal level. Constant physical proximity tends to be exciting but also dangerous. The communards introduce us to the intimate dynamics of their group through vivid, sometimes half-improvised monologues, songs and dialogues with rhythm set by their physical actions and almost constant sounds of drums.

However, the very warm image and friendly ambience constructed at the very beginning disappears very fast. The idea of free love for an important cause is eventually replaced by jealousy. The slogan of freedom for everybody is replaced with a strict division based on the ‘if you’re not with us, you’re against us’ rule. Sex is not necessarily related to love. Those conclusions are hardly ground-breaking, but due to skillful directing and the actors’ commitment they appear fresh and serious. Desperation substitutes enthusiasm and bitterness takes the place of pleasure. Apparently idealistic activism is surprisingly close to terrorism. The community eventually falls apart.

Inspired by the movie „Fuck for Forest” by Michał Marczak